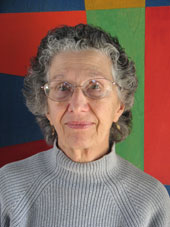 Nan Jay Barchowsky based the BFH method principally on the early 20th century revival of italic handwriting in the United Kingdom, and on her own classroom experience. In 1975 Nan had the extraordinary and valuable opportunity to start teaching italic handwriting in an elementary school. She observed hand and finger movements that are most natural for young hands, and modified letter formations accordingly.

Nan followed the cognitive and physical development of students from age four into their teens. She came to understand how efficient handwriting instruction can sustain legibility and age-appropriate speed through the school years into adulthood.

Years spent in classrooms demonstrated the merits of a handwriting program that includes pre-writing exercises and simple letterforms that quickly and easily flow into a true cursive. Nan was inspired to share her experience and further better handwriting. In the 1980's she edited and published an internationally distributed newsletter, Cursive Italic Handwriting, the Barchowsky Report on Handwriting.

Then in 1997 Nan published her first manual with a CD-ROM As with the current 2008 version, one could edit exemplar pages before printing them. But technology marches on and great improvements became possible. We now have an advanced, more efficient and easier to use program.